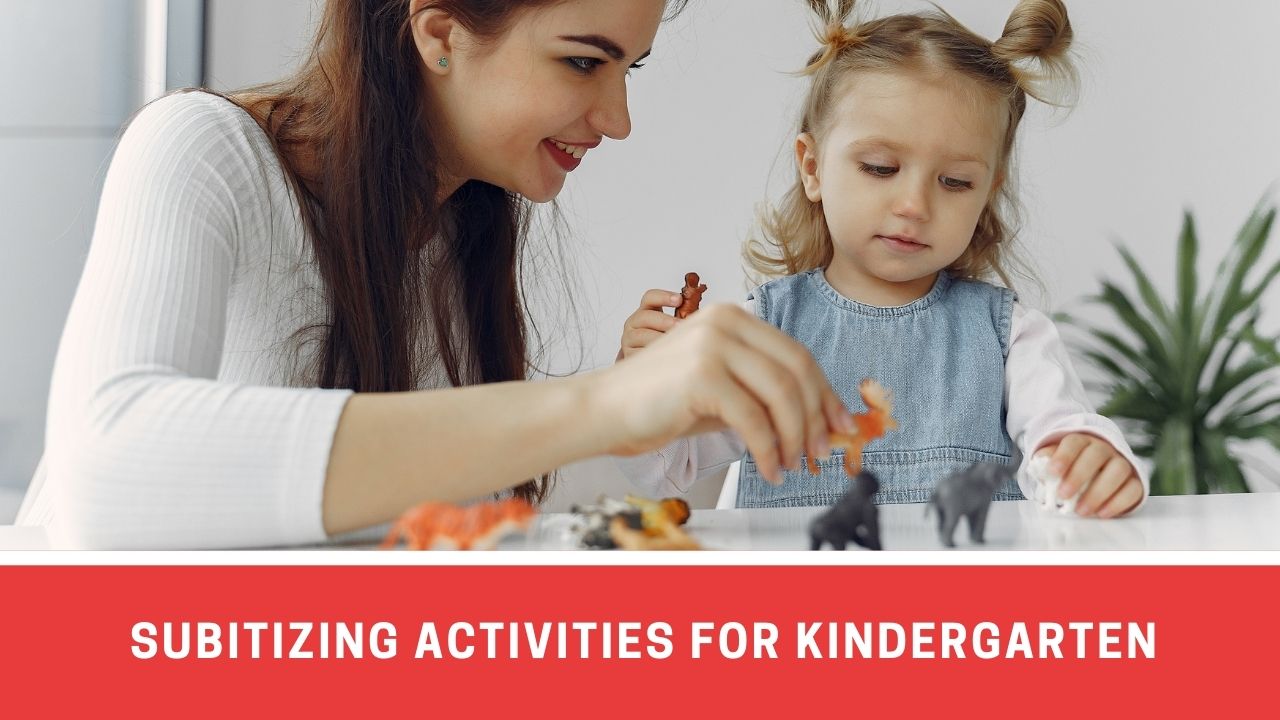 Subitizing is the art of recognizing numbers by a glance, without undergoing the actual process of counting.

Derived from a Latin word subitus, which roughly translates into ‘sudden’, Subitizing is a learning strategy that calls for a fair approximation of the numbers, without having an exact estimate of the same.

Subitising is the initial step in making a child understand the meaning of numbers and their connections with corresponding things and items.

Subitizing also helps the child from having over-dependence on counting as often situations in life require faster recognition of numbers, where speed takes precedence over accuracy.

For example, counting guests in a function or cars in a traffic jam.

Complex subitizing also develops the skill of pattern recognition and sharpens the analytical skills of the child.

Kindergarten is the time period in the nourishment and personality development of the child where he or she starts a wider interaction with the outer environment, away from the cozy comfort of home.

It is also the time when the child needs to start developing number sense.

On that note, the following are a few subitizing activities for the Kindergarten classroom to introduce them to the magic of numbers one subitizing step at a time:

Interesting classroom activity for the Kindergarteners is to take them around the classroom or even the playground and make them observe the different items in their surroundings.

You can then ask random and quick questions to your students like the number of pens lying on the table or the number of windows in the classroom. Consequently, you can reward the child who gets the maximum number of answers correct.

This way you are not only perfecting your students in the art of subitizing, but also helping them develop a keen sense of their surroundings, and sharpen the observation skills that will help them in the long run as they course through their lives.

This can also act as one of the introductory sessions to Kindergarten, where you can assess the prior learning of each child.

Teaching your Kindergarten students to love and care for animals is an important part of their emotional development.

It is also important to teach them about the different kinds of animals. Have your Kindergarten students draw animals large-sized like ladybugs, butterflies, dogs, etc. Then draw circles in their imaginary bodies.

The next step is to get a colorful die and roll it. The students have to color the numbers of circles in the animals corresponding to the number on the die. Slowly, increase the time allotted to complete the coloring. Thus, your Kindergarten students become aware of the art of subitizing and also end up learning about the many animals gifted to us by Mother Nature.

Divide your students into groups and get them large-mouthed jars to start the fun activity. Also to be used as props are colorful ping pong balls to get them all excited.

Mention a number loudly and then ask the children to quickly pick that number of balls and throw them inside the jar as quickly as possible. The child who puts the ball in the jar the fastest and with the most accuracy wins the game. You can repeat this game with multiple items like buttons, beads, or colorful erasers.

You can slowly increase the complexity of the game by asking them to pick up the balls of only a specific color. This will help them not only to get quick with numbers but also the ability to differentiate between different colored objects.

Subitizing SWATS is a fun way to teach your Kindergartens the art of subitizing. It contains a range of props like multiple dice cards, number cards, hand symbol cards, etc.

The students have to select the right numbers or symbols by swatting on them. And often, they have so much fun swatting and subitizing, that they forget that they are sharpening their math skills along the way.

You can play this game in small groups and then the winner of each group will play with the winners of the other groups.

Thus, you can end up turning the entire exercise into a Subitizing Swatting Tournament of sorts!! And maybe the winner gets to keep the SWATS until the next tournament!

A little bit of homework in the Kindergarten classroom will sometimes do the child good in understanding that learning is not always fun and games.

You can download the printable subitizing worksheets for this and ask your students to complete the questions and quizzes on these worksheets.

These worksheets contain multiple questions based on dice, dominoes, and dot charts. Thus, they can help increase the pace of subitizing learning for your Kindergarten students, once they have grasped the basics of the concept.

Although subitizing is an art that should be started at the home at pre Kindergarten level only, still educators have a special responsibility to nurture the mathematical minds of students, which has its foundation in subitizing and number sense.

READ :   Important Dyscalculia Screening Tests For Adults You Must Know About

However, parents can lend them a helping hand by familiarizing the children with the basic concepts of subitizing in their homes. Here are some of the suggested activities to help the children in being Kindergarten ready with basic subitizing skills.

After all, a drop of wisdom from each river in the Child’s mind can expand their mind’s ocean.